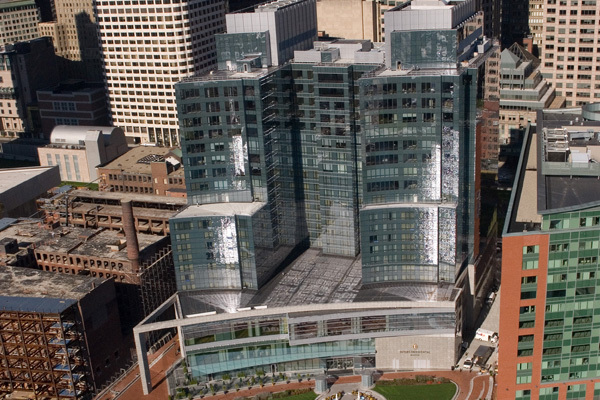 InterContinental Boston has been open since late 2006 and is popular with the business crowd during the week. As a former Bostonian, I don’t think this fabulous hotel has gotten its due.

Most new buildings are like most old buildings in the city: staid and made of brick. Right away The InterCon Boston explodes that old-fashion notion with its curving glass façade. The lobby is grand and airy and begs you to walk from busy Atlantic Avenue entrance to right out to the back patio and walkway facing Fort Point Channel and the old converted factories of South Boston. (In fact this area is considered the ‘New Boston’ and features hot restaurants, stores, condos and lofts.)
This is so not your grandma’s Boston!There are three terrific dining options. Miel Brasserie Provencale is their fine dining choice with crisp attentive service in a relaxed atmosphere. It’s priced incredibly reasonably, especially during lunch. The RumBa is a Caribbean-infused bar/lounge with lots of rum drinks and great nibblies and a strong raw bar selection. Boston is known for its seafood, of course.
My favorite choice is Sushi-Teq and the more intuitive of you may have guessed correctly that that refers to its rather unique sushi-tequila pairings. There’s a diverse menu of a la carte items but for $65 you’ll get a multi-course meal of delicious sushi choices paired with a wide arrange of skillfully curated tequilas, which contrary to popular belief are not meant as a shot drink. There’s a lot of complexity in some of the higher-end tequilas you will try.

The rooms are light filled and airy. One of the nicest lines in the building is the “02” line. I was in room 802, a corner suite with an angular bedroom with two entire walls floor-to-ceiling glass offering stunning views of South Boston. The fitness center is much larger and better equipped than most and boasts a pool and a steam room.

To get to Boston from New York, I took LimoLiner, which is a luxurious alternative to some of the cheap but cramped bus lines offered these days. It’s not that much more expensive than MegaBus or Bolt but you also get free WiFi, much more space per passenger and the attentions of a bus attendant as well as lunch and unlimited beverages.