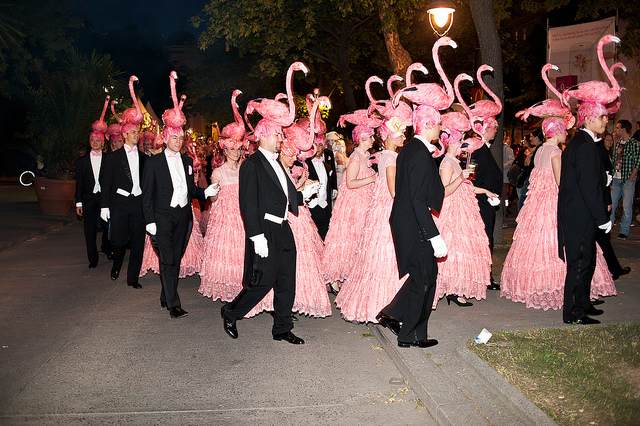 You have to love it when a destination promotes itself as having balls!

Who would have expected it from “stodgy” old Vienna? Well, actually we would have. Vienna’s is not just the capital of the former Austro-Hungarian Empire. It’s also a center for innovation, exciting modern art and lots of cool and cutting-edge events. Including these balls, or dances.

Below and on the next page are some of the events we think will most appeal to LGBT travelers sent by our friends in the tourism office who were the ones who gleefully tee’d them up as a city with balls. If you decide to head to Vienna, be sure to download our free app and subscribe or purchase our January/February 2013 issue.

The Life Ball (May 25, 2013) is Europe’s wildest – and highest grossing – AIDS/HIV charity event. Everyone from the Federal Chancellor to Hollywood A-listers makes their way to Rathausplatz for the fashion show, before letting their hair down for a night of hard partying. Life Ball tickets are a seriously hot commodity, but everyone can enjoy the spectacular opening ceremony and fashion show free of charge.

In spring, the festivities of Vienna Fetish Spring festival (May 29–June 2, 2013) include the presentation of the Mr. Leather Austria award. In summer, the identities queer film festival (Jun 6-14, 2013) is a major cultural high point and the Austrian capital’s second largest international film event. Leading queer film productions from across the globe will be screened at some of Vienna’s most attractive art-house cinemas. A packed program of fringe events, and no end of parties and club nights promise an exciting week. identities also runs various gay and lesbian film screenings in the city between installments of the biennial get together.

Vienna Pride and the Rainbow Parade are the absolute highlights of the gay and lesbian year in Vienna. The city of tents making up the Pride Village (Jun 11-16, 2013 on Heldenplatz) offers a mix of cultural activities, stage shows, fine food, information and parties. Meanwhile, the Rainbow Parade on June 15, 2013 will take to the Ringstrasse boulevard once again this year, issuing a renewed call for tolerance and equal opportunities. After the post-parade demonstration, Vienna’s clubs will open their doors for a party night lasting until the sun comes up. There is more to the international Wien in Schwarz leather and fetish meeting (Oct 24–27 2013) than the obligatory parties; it also features a side program packed with tons of attractions including wellcum, hart6 and brunch.

Anyone who still believes that Viennese waltzing is the exclusive preserve of the straight crowd has got another think coming! The Rainbow Ball at the Parkhotel Schönbrunn has reclaimed the classic Viennese ball for the gay and lesbian community. Formal evening wear is de rigeur at this popular event. The Kreativball has come on leaps and bounds since its modest beginnings: these days this alternative event for gays, lesbians and their friends is usually sold out long before the big night. The only thing the Rosenball has in common with the classic Viennese ball format is the opening with a traditional Polonaise. This outlandish disco is an alternative to the Opera Ball, which takes place on the same night at the State Opera House.

Their social media channels for the community: