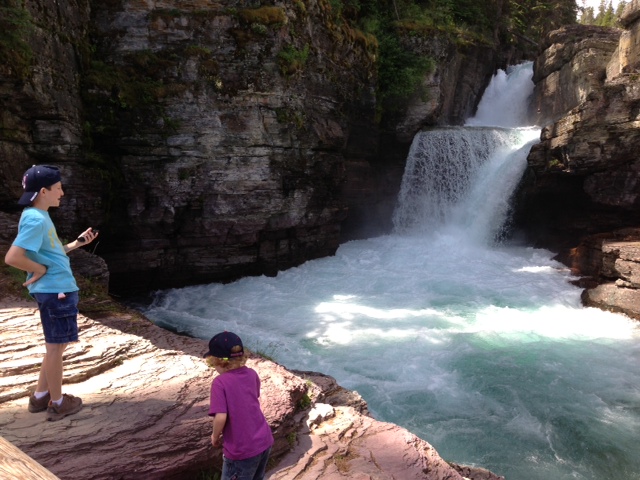 Glacier National Park has been a hit with the boys so far. We’re staying at a simple place in National Park property called the Swiftcurrent Motor Inn. It’s really an amazing location, about 10 miles inside the park, at the confluence of several hiking trails. Mountains seem to sprout up in every direction and the skies are an unreal shade of blue. The complex, a few miles west of the Many Glacier area, includes campgrounds, small cabins to rent, and a very old school but serviceable series of motel rooms. There’s also a very nice Italian restaurant and a gift shop that sells camping and hiking gear, along with a good selection of food and drinks.

I specifically chose the motel option because it’s about half the price (a mere $145/night) of the rooms at the more grand lodges sprinkled across the park. And while the 100-year lobbies, built from amazing timbers, are truly spectacular, I’ve found that the rooms are every bit as basic as ours at the Swiftcurrent. Given the minimal time we’re spending in the room, it seems silly to pay more than $100/night for a nice lobby.

On our first day in the park, we took a 2.5 mile level hike around Swiftcurrent Lake; basically a beautiful walk through the woods with occasional jaw-dropping views. We made sure to sit in the outdoor amphitheater for the 8 p.m. ranger talk, a great discussion about how fire is important to the life cycle of the forest. It was given by a female ranger, a seasonal worker who was an elementary school teacher.

Day two included a lovely drive over part of Going to the Sun Road, the main artery for the park. We hiked to numerous waterfalls, saw two mountain goats up close and stopped the car a dozen times for incredible views. The mountains, the valleys, the waterfalls, all of these kept the boys attention as much as I had hoped.

We sat in on out second ranger talk tonight, “Seasons of the Moose,” another nice talk, but one that reminded me that parents need to consider the appropriate ages for an event like this … Or if you’re going to bring a very young child, be prepared to control the child, and be prepared to leave if the child doesn’t act appropriately. A couple in front of us didn’t seem overly concerned about controlling or correcting their 3-yr old girl and she kept bothering my 6-yr old son, Matthew, who seemed perplexed in how to tell her no without being rude. Luckily they finally left about 30 minutes into the hour long talk.

In addition to the sights we’ve seen, the boys have been obsessed with seeing every gift shop in the park, and we’ve mostly given in, but have used it for everything from getting them to behave to eat their dinner faster. (“The longer you take, the less time we’ll have for the gift shop, boys …”) That has worked … well, somewhat.

Tomorrow, we are staying close by, leaving the car parked, and hiking trails ear our motel. Looking forward to a lazy day that includes a midday nap!