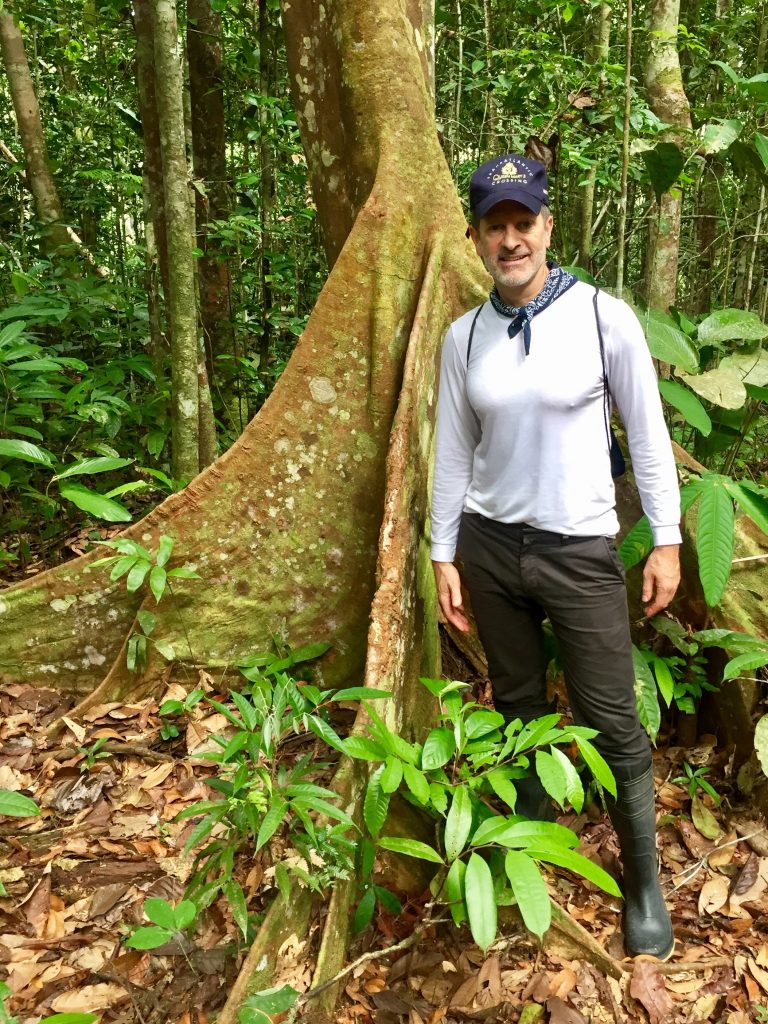 When you hear river cruise you probably think, Europe, which is where the vast majority take place. And that the passengers are all much older. And white. And it’s lovely but perhaps a tad too genteel.

Well, think again! That’s not the experience you’ll find on this river cruise. I was invited to experience a three-day journey in Peru’s lush Amazon basin aboard the modern Aqua Expeditions Aria, with floor-to-ceiling glass walls wrapping all three customer decks which virtually blends into the jungle as it smoothly plies the inky river ways. The common areas are casually elegant: understated but sumptuous like Ralph Lauren’s flagship-store on Madison Avenue (minus piles of Polo shirts). But the most dissimilar aspect from other mainstream river cruises we’ve taken: your fellow passengers.

Besides our small group of lesbian and gay media and travel agents, the 26 remaining guests (all couples including two gay men) ranged in age from their late 20s to early 60s, with passengers from Japan, Australia, the U.K., Germany, Italy and American coastal states. What everyone had in common was an interest in the Amazon, one of the world’s last great unexplored regions perched high atop many the bucket list, and an open-mindedness that comes with frequent long-distance travel. No one batted an eye at our big group of homos nor at the quiet but romantic gay couple, warmly welcomed into all groups. Read on to discover a unique and enriching experience that you may not have even thought possible.

Story by Ed Salvato pictured above and below (here with a fellow traveler, Lynda Gregory)

MEMORIES AND MOMENTS ABOARD THE AQUA EXPEDITIONS ARIA

Swimming in the Amazon

The three skiffs — each filled with 8 passengers, a pilot in the back and a guide up front — motored quickly away from the Aria as the sun began its punctual descent in a blaze of glory. Sunset and sunrise times don’t vary much near the Equator. Our skiff found a remote location; the pilot cut the engine so nothing manmade drowned out the ever-present jungle sounds. Unseen birds cawed while a Black-collared Hawk swooped to the river to pluck out an unlucky fish; a troop of barely seen Titi monkeys rustled through the trees in streaks of red; the eyes of an alligator-like caiman silently broke the surface to investigate this bulky intruder. 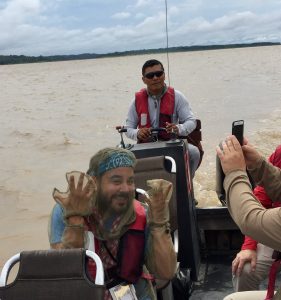 “Ok, if anyone wants to jump in the river, now’s the time.” Crickets. Not the insects but the lack of response from my skiff-mates. We are told this is a deep part of the river, and our guide ensures us there aren’t any piranhas. Right?… right?! Ok, no one is going in. What the heck! It’s been on my life list since, well, forever. Without allowing myself more time to think, I strip down to my shorts and jump in. After a few minutes two others join me. We swim around for about a half hour. Was that a little nibble at my foot? Hmmm, maybe the piranhas were curious but realized I was just too big to eat. We get back into the skiff — an ice cold local beer as reward.

Each day the staff of th Aqua Expeditions Aria organized excursions, included in the price, which are mostly waterborne experiences when the rivers are at their highest levels (generally November through May) but with many land-based excursions during the drier season (generally June through October). This morning we are going to fish for … wait for it … piranhas! We’d watched local villagers grilling them for dinner, dinner-plate-size specimens with razor-sharp teeth jutting out in menacing (and obviously this time anyway futile) defense. But wouldn’t they just bite through the line? We skiff to a likely section of the river — not too deep where this carnivorous fish likes to cavort. The fishing gear is comprised of a strip of bamboo, a nylon string, hook and a little piece of chicken gristle. Very Huck Finn. Agitate the water with the tip of the pole then let the baited hook sink into the water a couple of feet. Feel a little tug? Pull sharply up and behold a piranha! Of course it’s catch and release, and we’re assured the fish feels no pain. 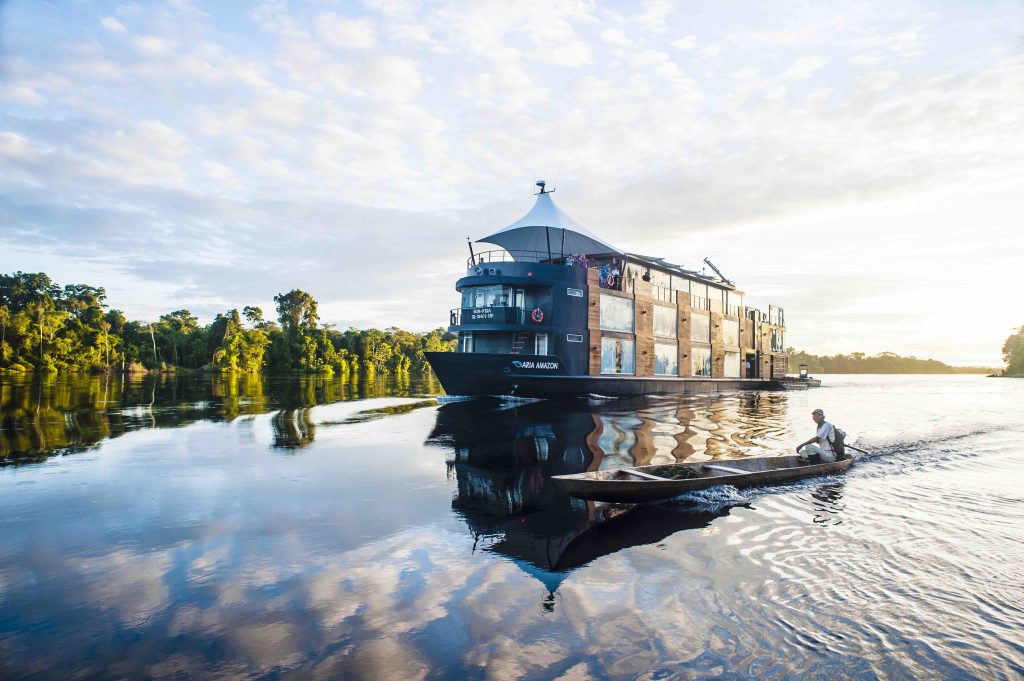 French toast and maple syrup in the jungle

The onboard cuisine never included piranha but everything was as fresh as possible, all locally sourced from villages we visited during our journey or the farthest shipped in from Lima, a couple hours by plane and boat. The TripAdvisor reviews and magazine coverage all rave about the incredible cuisine on the Aria but how could that be true on this small boat with one chef and two assistants working in a galley kitchen no bigger than what you’d find in most New York City apartments? Well, after three sit-down dinners and our buffet-style breakfasts and lunches, I can verify, that yes, this is some of the best cruise cuisine I’ve ever eaten, all prepared by a team that came from the nearby jungle villages with a passion for cooking and a lot of training at schools in Lima.

Ok, I was hoping for and expecting all the incredibly fresh and exotic fruit several of which I had never heard of but everything else was a revelation. Some of the best Italian style fresh pasta I’ve ever tried. A variety of vegan options, including colors of quinoa I had never seen. Delicate sauces. Homemade bonbons. Espresso. Fresh-baked croissants. In the Amazon! Delicious. One day the manager asked if we wanted anything else. I half-jokingly said French toast and maple syrup. The next morning: voila, my breakfast choice along with syrup they prepared overnight from a local fruit. 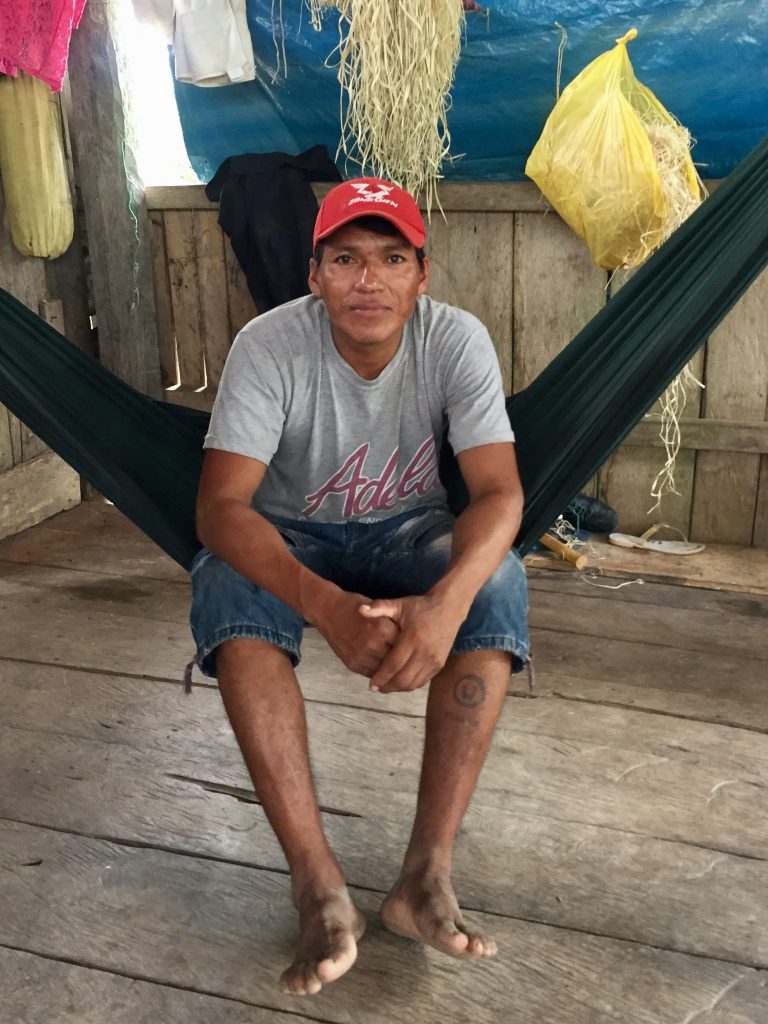 In the drier season, the Aria team leads overland excursions. Just as on an African safari, our guides, all from local villages, are highly trained naturalists, making jaunts up and down the diluvian trails highly informative. Their eagle eyes spotted creatures who otherwise blended into their surroundings, including poisonous frogs, elusive macaws, ever-smiling sloths, countless birds and a variety of plants including rubber trees (which was the source of incalculable wealth in this part of the world for a brief period a century ago). At one point our guide’s lightning-fast reflexes allowed him to snatch a baby caiman from the shallows at the river’s edge.

The highlight of our exploration was meeting local villagers whose tiny communities dot the banks of the Amazon and its many tributaries. The main river branches are pretty busy with passenger and cargo boats and you can see puffs of smoke from villages along the banks and further inland. Some have electricity but most don’t. Their homes and community buildings (schools, clinics, administrative buildings) are perched on stilts, a hint of just how high the river gets in rainy season. A number of villages are truly remote, and there remain uncontacted peoples in the deepest most inaccessible parts of the jungle. Most villagers speak the local dialect as well as Spanish though many only speak the dialect. We didn’t meet any openly LGBT locals however our guides told us that in the jungle bisexuality especially among men is common.

The Aqua Expeditions Aria randomize visits to local communities so none become dependent on the gifts that passengers are encouraged to bring (mostly basic medical and school supplies). Each visit had a feeling of mutual, respectful curiosity. A highlight was our visit to a “large” community with a half dozen homes for extended families and a schoolhouse, where the children prepared several songs. Family life remains traditional with the men leaving early in the morning to hunt or fish and the women mostly remaining at home to cook and look after children. There is some agricultural cultivation by villagers who tend small plots of land. The community lives in the jungle so it was no surprise to see many animals traipsing through town, including a 10-foot long anaconda, a pair of adorable three-toed sloths, and a furry Spectacled Owl.

Aqua Expeditions, which operates in Amazonia and the Mekong Delta, takes sustainability seriously. You can 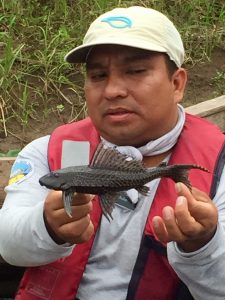 read the details of their various programs here, but we appreciated several efforts in particular. Aqua Expeditions participates in Pack with a Purpose, a global initiative, encouraging all passengers to leave some space in their luggage to bring recommended supplies (from an online list) for area schools or medical clinics in need. Aqua Expedition supports local environmental conservation and wildlife protection including work in Peru restoring the taricaya turtle population. Finally, we felt the positive impact of the emphasis Aqua places on training and hiring locals from nearby Amazonian towns and villages: from cabin stewards right on up to the captain himself. Our guides, all locals, spoke multiple languages fluently including local dialects, Spanish and English. Several of them were also studying French at the Alliance Française in the Amazonian gateway city of Iquitos. Without companies like Aqua Expeditions, there would be very few such well-paid opportunities in the region.

Ok, you’re in the Amazon jungle, one of the most remote parts of the world. While the local villagers are known to practice bisexuality, it’s not really possible to meet them one on one. And of course not recommendable. If you follow our advice and spend a good two to three days in Lima (see our What’s Hot: Lima piece in this issue), you’ll have plenty of opportunity to meet gay locals.

Know before you go

Is it for you?

The article above is editorial based on a press trip. ManAboutWorld highlights tours and cruises we’ve personally participated in, and is editorial, not advertorial. Like virtually all travel publications, we sometimes accept discounted and sponsored travel, but ManAboutWorld is beholden to no one but you. Our recommendations are based solely on the experience and opinions of our editorial team and trusted network, putting our readers’ interests above all. If you ever have an issue with anything we recommend, please let us know. We always have your back, and your travel satisfaction in mind. Read our full disclosure here.