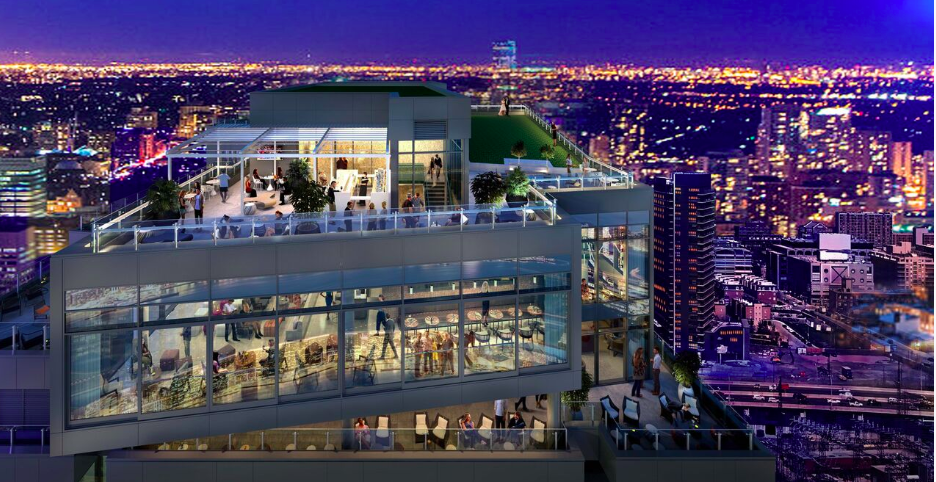 The brand-new, stylistically-striking Hotel X Toronto in Toronto, Canada is anything but yet another cookie-cutter urban luxury hotel crammed into a downtown lot. Hotel X Toronto is a very short taxi/Uber/Lyft ride from everything that Toronto has to offer; making it an ideal headquarters for enjoying Pride Toronto or any other event in Canada’s largest city. Story by ManAboutWorld correspondent, James Careless.

Worth noting: The 404-room, 30-storey Hotel X Toronto is likely correct in claiming that it offers “a wealth of amenities unrivalled by any downtown hotel, including four indoor tennis courts, a full-service spa, two year-round heated swimming pools and TEN X TORONTO—a 90,000 square foot athletic centre with its own children’s area.” In addition to its restaurants (with options for vegetarian, gluten free, and vegan diets), Hotel X Toronto has an art gallery, beer garden, stadium-style movie theaters, event spaces, historical exhibits, and the three-storey rooftop SkyBar with – again – unparalleled views of downtown Toronto and the lake. The multi-story ‘living wall’ at the Front Desk – literally a vertical surface of plants rising high above one’s head – is impressive in its own right.

Hotel X Toronto is currently in what is known as a ‘soft opening’ until the end of July 2018, when it will officially open. This means that the hotel is still in the process of getting everything running – and giving guests price breaks as a result of it. (Note: Everything I experienced while there gave me the feeling that the hotel was fully operational.)

The good news: “During the soft opening period of Hotel X Toronto, you will find rates reduced as much as 30%,” said Celso Thompson, the hotel’s director of Sales and Marketing. “At any time, the hotel offers a prepaid, non-refundable option which clearly is the best deal if you are certain about your travel plans. Rates start at $350 for the entry level rooms.” 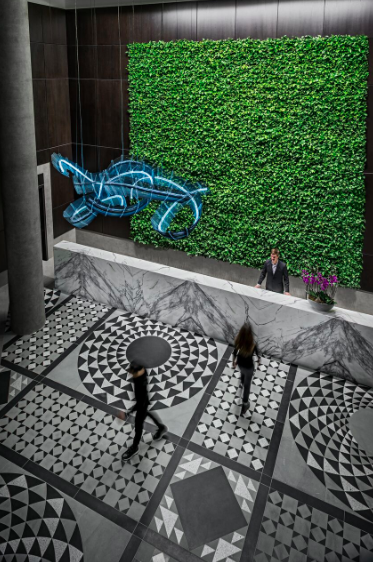 Located at spacious Exhibition Place (home of the Canadian National Exhibition – CNE — every summer, and various Class A events and conventions year-round), Hotel X Toronto is right on the shore of Lake Ontario. It is far enough from the downtown core to have a clear, unobstructed view of the lake, the nearby Toronto Island with its parks and airport, and Toronto’s major buildings; plus the lakeshore’s Ontario Place and the 1840s-era stone Stanley Barracks at Fort York.

Having grown in Toronto and spent many summers at the CNE in all its gaudy midway glory, I could never have imagined a true luxury hotel being located on the fair grounds. But much has changed at Exhibition Place. New convention/display buildings have been added (like the Enercare Centre) and older spaces renovated, while the rundown Exhibition Place grandstand has been replaced by the modern BMO Field (home of the Toronto FC pro soccer team). The historic Stanley Barracks next door has been restored and softened with the addition of gardens.

Add the fact that Hotel X Toronto is right on Lake Ontario, yet so close to the downtown hub (transit is available, in addition to taxis and walking), and this hotel combines the best of open waterfront breeziness with downtown urban access. It is a welcome alternative to the very best downtown cor hotels that are crammed together, through no fault of their own. (Runners will particularly like the quick access to the lakeshore and its open spaces, rather than being confined to car-packed downtown sidewalks.)

I was fortunate to stay in a corner suite, on the 18th floor of Hotel X Toronto. I walked into an entrance hallway that angled left to the spacious modern bathroom (including a glass-walled shower with space for more than one), then turned right into a truly roomy bedroom with floor-to-ceiling full glass windows on two side.

The view alone from this suite justifies the price of admission. It is one of the best that I have seen in Toronto’s many downtown hotels. But the quality of Hotel X Toronto’s modern furniture and appointments is also worth mentioning: The wood, metal, leather and fabric far are above the usual hotel fare. They and the room’s fabric walls make you feel like you are staying in someone’s elegantly-decorated high-end condo; rather than yet another unsuccessfully pretentious hotel.

I was also struck by the bathroom’s elegant fittings, and the little details that were tended to; such as having two bathrobes and slippers available rather than just one. The room service was also a treat: What a luxury to have smoked salmon Eggs Benedict delivered to one’s room for breakfast! 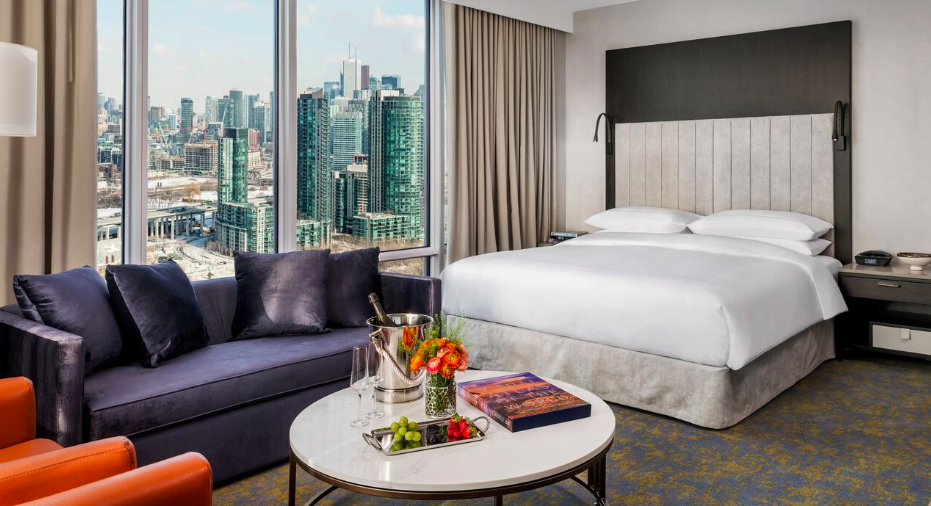 If ‘Gay Factor’ translates into superb modern design with no false flash, elegance and quality in all things, and the sense that staying here somehow raises one’s game and sense of self, Hotel X Toronto has tremendous Gay Factor. That said, what I have just said applies to anyone, regardless of gender or orientation – as long as they have class, style, and a sense of how to comport themselves in public.

Meanwhile, Hotel X Toronto is a quick taxi/transit ride to everything in downtown Toronto; be it the city’s famous Gay Village, the Rogers Centre (home of the Toronto Blue Jays baseball club), the Theatre District, the business core, shopping, or the Toronto Island (accessible by an underground tunnel at the nearby Island Airport, or a short ferry ride across the harbor; well worth it).

ManAboutWorld highlights properties we have recently and personally stayed at, and is editorial, not advertorial. Like virtually all travel publications, we sometimes accept discounted and sponsored travel, but ManAboutWorld is beholden to no one but you. Our recommendations are based solely on the experience and opinions of our editorial team and trusted network, putting our readers’ interests above all. If you ever have an issue with anything we recommend, please let us know. We always have your back, and your travel satisfaction in mind. Read our full disclosure here.